Note: It’s been over a year since I introduced the Cast of Characters inhabiting this blog. I’m an at-home mom who works part-time as a writer, so my world is small: me; my son, Agent 006 (age 6); my daughter, the Birthday Girl (age 3); and my Husband. Here is my daughter. 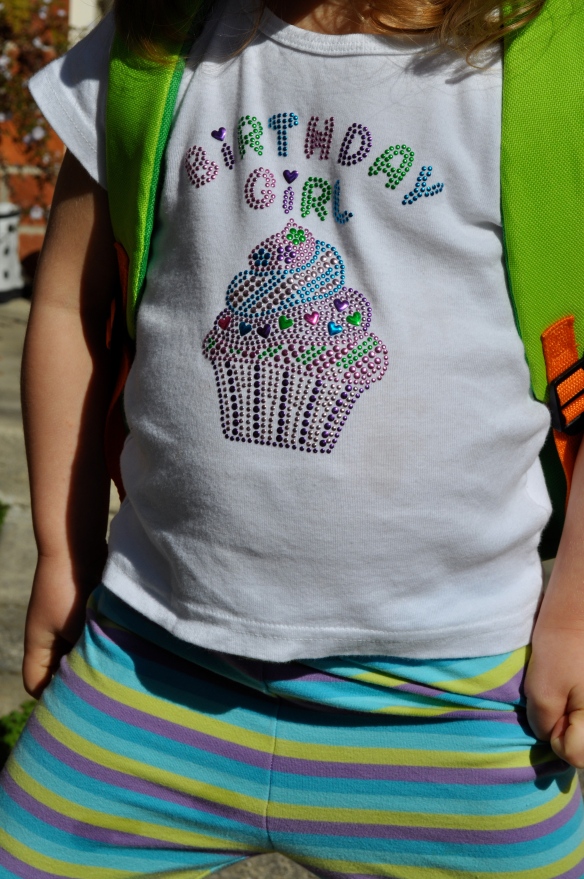 My daughter turned three a few weeks ago, and she definitely got the memo.  Since my son was actually three for two years (skipped four and went straight to five), from an emotional perspective this is my third round of three. I have the battle scars to prove it.

Two can be terrible. Everyone says so. The crying, the total lack of reason, the tantrums, the introduction of the word “No!” But two-year olds are generally under 25 pounds, and still have those chubby toddler legs–which slows them down a little–not to mention a fair amount of baby charm left in them.

Let me tell you about three, in case you haven’t been there yet, haven’t been there for a long time, or NEVER IN YOUR LIFE intend to parent a three-year old. If age two is training bras and mood swings, age three is the real deal: full-blown acne, crashed cars and broken curfews. The way I see it, three is the last chance I’ll have to practice parenting an adolescent before my children are bigger than me.

Three is when your child becomes VERY CLEAR that she has a will of her own.  Note duly the words “of her own”–this is the most important part. It doesn’t matter that my daughter has always been an easygoing, happy child. It doesn’t matter that she’s the kind of kid with a natural desire to connect and go with the flow. At three, she is developmentally driven to distinguish herself, which means that even when her desires happen to precisely mirror ours, she MUST insist on the opposite. This is exhausting for all of us. The poor child has not smiled in months.

This time around, I have a little more compassion for her struggle, and a lot more clarity as a parent. With my son, I confused “three” with his own personality, or alternately with my parenting; now I know that Three is its own animal, and neither my daughter nor I plan to extend a very hospitable welcome. Three reminds me of the ant hordes that would periodically invade our homes when I was a Peace Corps volunteer down in Paraguay. Implacable, unstoppable, and also necessary, they marched in and covered every surface, ate every scrap of edible: crumbs, insects, an entire pan of chipa guazu, dust, spiders and even their webs. Three has a purpose, and my job is to stand here and let it crawl all over me without twitching.

Well, it is a bit more complicated than that. See, I am my daughter’s primary result set. She is mandated by her age not only to know her will (indiscriminately defined as distinct and contrary to everyone else’s), but also to figure out how to impose her will. She wants to learn how to control her little world, just like the rest of us. This child was gifted from birth with the multiple talents of 1) knowing what she needs and wants, 2) asking for it directly, and 3) gracefully letting go of the unobtainable (her catch phrase for the last year has been, “Oh, fine!” delivered with just the right combination of acceptance and exasperation). This has worked pretty well for all of us. But now, age three has come along, insisting that she experiment with the full range of less attractive and less effective methods for getting her way. These attempts at manipulating her world include: whining, screaming, whining, hitting, whining, stalling, running away (on those long, fast, three-year old legs), throwing things, whining, arguing, defiance, and last-but-not-least, batting her eyelashes. My job is to withstand the storm: calm, non-reactive, carefully teaching her that getting her way is easiest and most likely when she returns to what she knew first: just ask for what you want, and see if it works out.

You can guess how often I get that right. Me and Three: NOT a match made in heaven. I do patient. I do caretaking. I do efficient. I’ll wipe your nose, make you a nice snack, listen, fill your water bottle, and get you and your books to the library on time. But I’m just not that silly mom who can really connect with the best of Three. So the real kicker is that while I’m busy fuming about this little girl who wakes up whining, screams and kicks herself through the day, and goes to sleep whining at day’s end, I’m missing all the good stuff.

This time around, though, I know that Three is just a passing storm. In just a few months, my birthday girl will stop obsessing with all the different finger permutations she can use to display her current age, and figure out that FOUR comes after Three. With an older brother to count the way ahead of her (supremely unaware of his own developmental repeats and skips), she’ll get there faster than we can say Happy Birthday! Until then, my little one, blessed be at three.

We share ideas to change the world, and ourselves. Make it happen!

6 thoughts on “The Birthday Girl”